In this guide you will find a detailed list of the many different Surf Spots around Bocas del Toro and also how to get there from PirateArts Experience Resort on Isla Carenero.

PirateArts Experience Resort is the best location for surfers that are visiting Bocas. We are strategically located on the western tip of Carenero Island putting us at just a 5 minute walk from the world class surf at Carenero Point. Surfers will also be able to hop on a water taxi from our private dock and be in the water at Paunch or Bluff within minutes. This is why the world’s best surfers have come to stay at our resort, and why you will love it also! 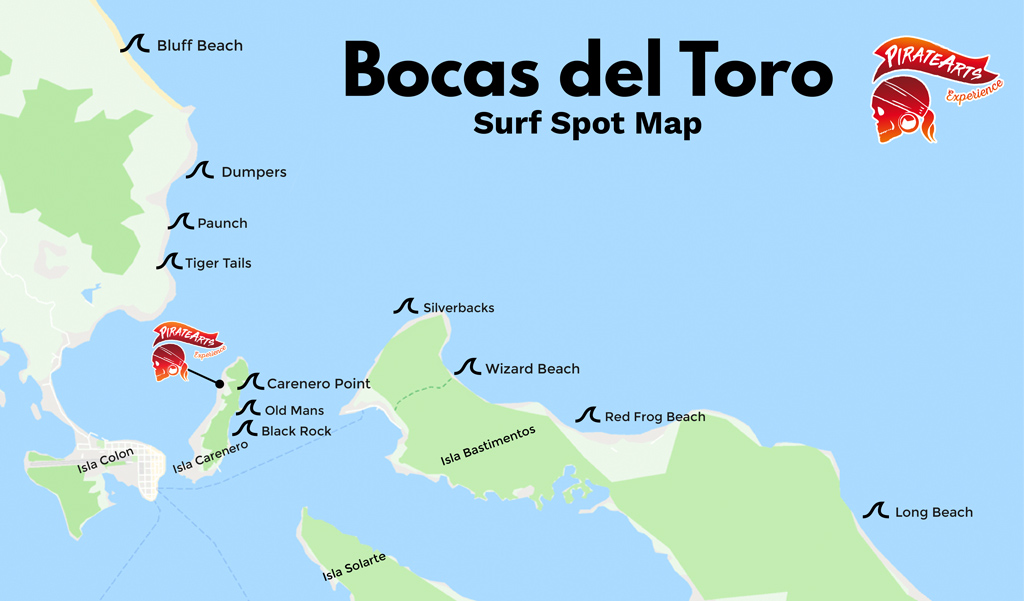 GETTING THERE: 10 Minute Water Taxi or 15 Minute Land Taxi

Bluff Beach is a beautiful stretch of coast on Isla Colon where the sound of the thick rainforest filled with howler monkeys and buzzing insects is in a constant battle with the roar of the waves breaking just a few meters away. The surf is heavy and punishing and will teach many a lesson to the amateur surfer or swimmer. This spot will deliver huge barrels even when it is small and becomes strictly for the best surfers when it is big. Bring an extra board because Bluff loves to break them! 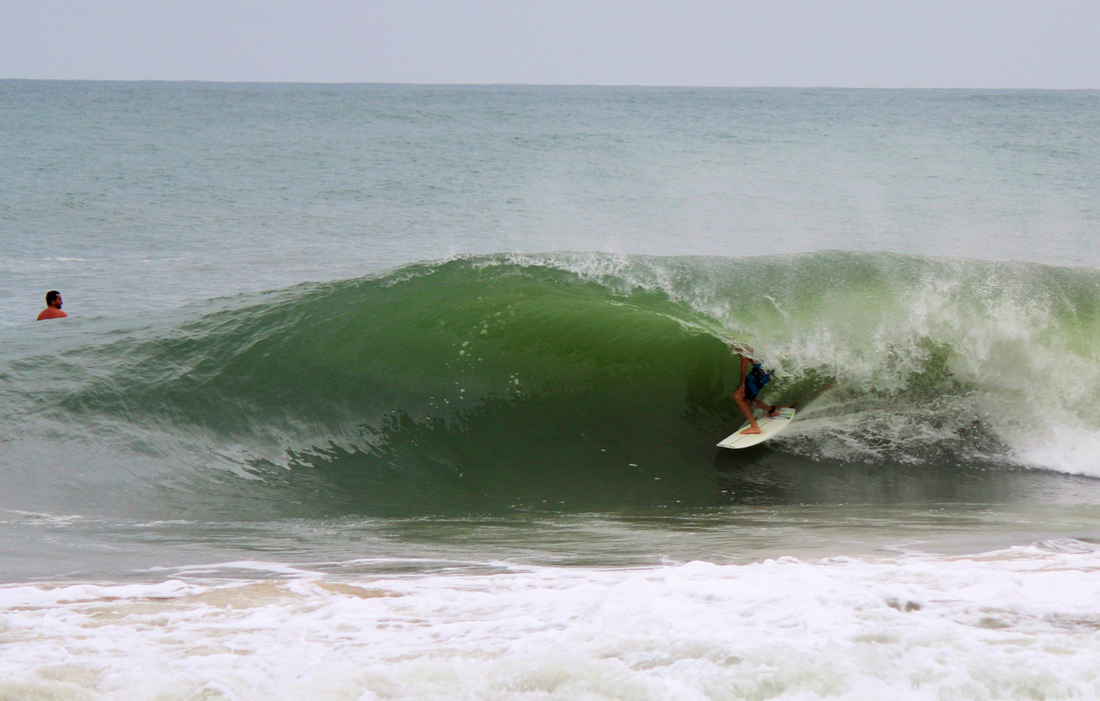 GETTING THERE: 5 Minute Water Taxi or 15 Minute Land Taxi

Dumpers is another heavy wave on Isla Colon that delivers a quick and hollow barrel over an extremely shallow reef. The wave comes from deep water and hits the shallow rock ledge causing it to barrel in the same place every time like a machine. This spot is frequented by the pros and can be found in many surf edits made in Bocas. Hire a guide to take you here if it is your first time or go with someone who has surfed it before and respect the locals who might be surfing there. This is an advanced only spot! 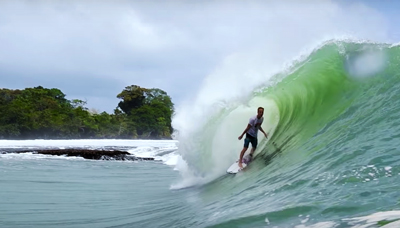 GETTING THERE: 5 Minute Water Taxi or 10-15 Minute Land Taxi

Paunch Reef is a left and right hand reef break that can have a few different take-off spots. The most crowded and best section of the wave breaks to the left and can have a big barrel section followed by a long open wall for turns. Paunch can be soft and fat when it is smaller but will famously turn into, “Punch,” when it is big. There is a small keyhole entrance through the reef that you use to paddle out from the beach, or you can get dropped off in the channel by water-taxi and paddle over to the break. 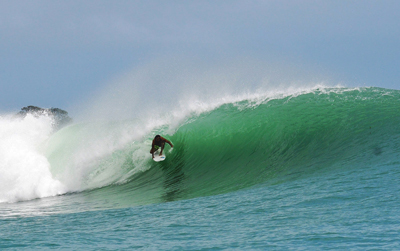 GETTING THERE: 5 Minute Water Taxi or 10 Minute Land Taxi

Tiger Tails is a right and left hand reef break that is a great spot to bring your non-surfing significant other as there is a great restaurant/ bar on the beach right in front of it called Paki Point. The wave has fast right and left sections with a menacing rock sticking out on the left that needs to be avoided. It can be shallow on the inside of the wave but the reef here is covered in a soft grass so it is not as threatening as some other spots. Tiger Tails can have swell even when it is very small but will be closed out when Bocas is at its biggest. 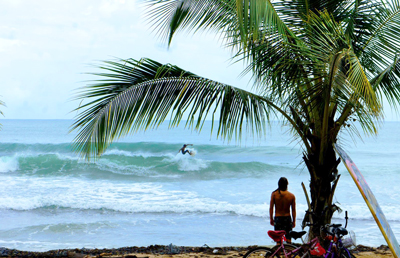 GETTING THERE: 5 Minute Walk!

Carenero Point is the premiere left hand point break in Bocas del Toro. It is located on the tip of Isla Carenero and features a long left hand breaking wave with multiple take of sections. When it is really good, it will break from the point all the way down to the inside offering the longest rides in Bocas and plenty of opportunities for barrels and turns. Carenero Point can be great for intermediate surfers when it is small to medium size but will deliver heavy beat downs when it is big, especially on the inside. Beware of paddling out past the top take off point, as the outside-outside of Carenero Point is for locals only and you will be sent back. 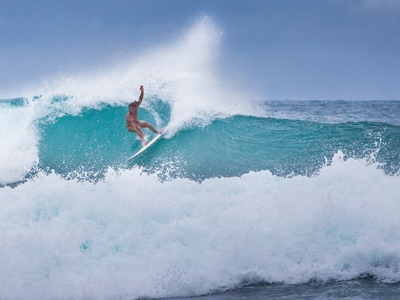 Old Mans is a smaller left hand point break that is located just down from Carenero Point and is adjacent to Black Rock. This section of reef also has a few different take off spots and is popular with the surf schools. It is a good entry level wave to get accustomed to point breaks and is a great place for younger kids to learn. There is shallow reef towards the inside of the wave so be sure to ride them to the left and get out before you lose your fins! 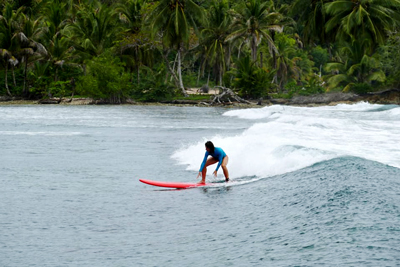 Black Rock is a popular reef break that sits just off the coast of Isla Carenero and is named after an outcropping of Black Rocks that stick out of the reef on the inside. This spot is very popular among beginners and surf schools and is where most of the surf lessons take place. Black Rock features both a right and a left and has deep channels on either side of the reef where the wave doesn’t break, so you can paddle back out to the top easily. The reef is deep and is generally not something to worry about. This is also a great place to practice your surfing etiquette before you graduate to the more advanced waves around the islands! 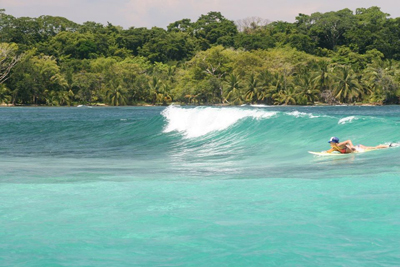 GETTING THERE: 15-20 Minute Walk or 5 Minute Boat Ride

Bibi’s Break is fun little wave that is great for young kids and beginners. It breaks over a shallow, mostly sand bottom and is a gentle white-water wave. Kids love this spot because they can stand and play around while they also surf. When the really big swells come the surf schools will often bring their classes here also. There is a nice beach nearby and a great over-water restaurant at Bibi’s by the Beach, hence the name of the break! 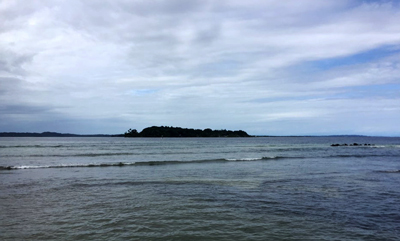 GETTING THERE: 15-20 Minute Boat Ride

Silverbacks is one of the most famous waves in Bocas del Toro and is reverently referred to as, “The Beast.” It is a reef break that produces a massive right handed barrel with no room for turns, or error. The wave is created by a steep underwater ridge that rises up from 40 feet deep to about 10 feet where the wave breaks. Big swells slam unimpeded into the ridge which shoots the energy upwards like a ramp, causing the lurching barrel to form. Strong currents and a shifty take off zone add to the treachery of this spot which should only be reserved for the most advanced surfers. 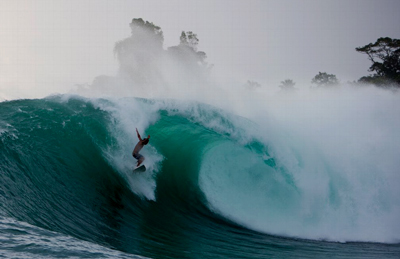 Wizard Beach is a huge stretch of sand that is a 20 minute walk through the jungle from the laid back Afro-Caribbean town of Old Bank on Isla Bastimentos. The wave itself changes from hour to hour depending on the tide and size, but catch it at the right combination and it can produce some of the best waves in Bocas. It is generally better with smaller swells and can have long lefts and rights depending on the sand bars. The trail to get there can be extremely slippery during rainy season but the hot afternoon sun will generally dry it out. Come here on a sunny day when the water is clear and you will see the magic! 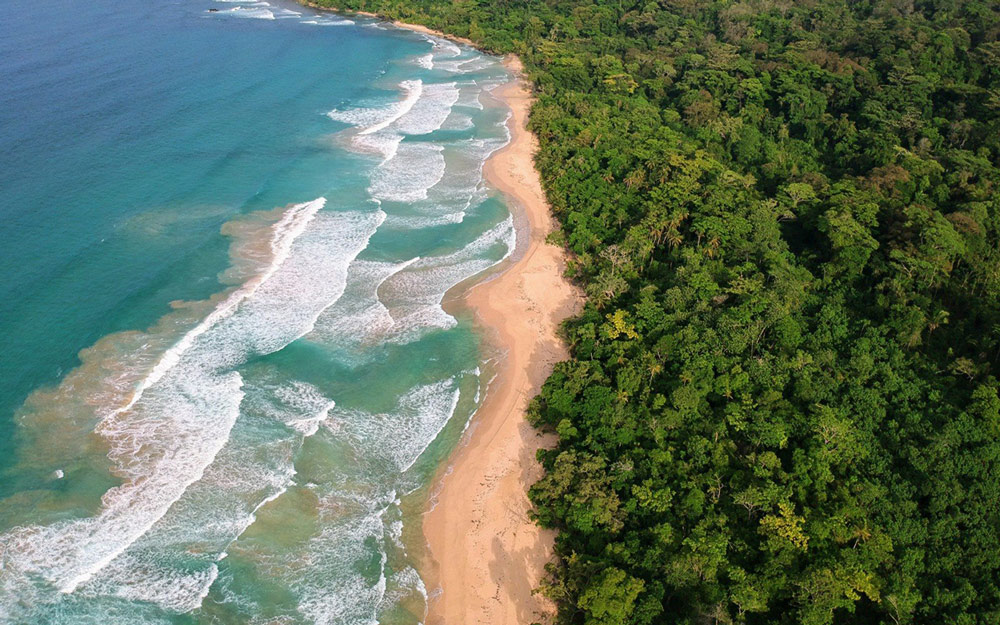 Red Frog Beach is the most advertised beach in Bocas. It is home to numerous lodgings and the infamous Red Frog Beach Resort development. It is one of the most popular tourist beaches around the islands and is better suited for catching a tan or playing volley ball than it is for surfing. The wave breaks fast and is normally closing out. There might be a few good days to be had here but you’re better off going to Wizard or Long Beach to surf and saving Red Frog for post surf fish tacos and cold balboas! 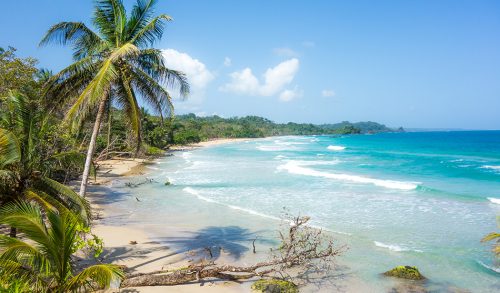 GETTING THERE: 30 Minute Boat Ride

Long Beach is a super sick wave that falls within the boundaries of the Bastimentos National Marine Park which means the entire beach is protected, mainly because of the abundance of sea turtles that nest here. It is a very long stretch of beach with nothing on it besides a small house in the corner where the park rangers are headquartered. The ride is a bit long to get out here but is almost always worth it. The wave is known to have plenty of peaks and barrels and can get very big and still be rideable. Go out here with a knowledgable captain and be sure to anchor the boat in the right spot! 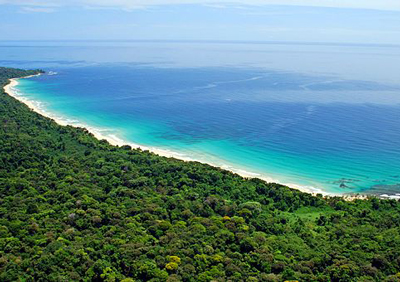 GETTING THERE: 30 Minute Boat Ride

Kusapín is mystical place in the far east of the Bocas del Toro province that is part of the semi-autonomous indigenous Comarca (reservation) of the Ngäbe-Buglé tribes. There are 5 of these Comarcas around Panama which were set up to give the native tribes power over their own lands. This means the central Panamanian government has little say with what they do there, and most importantly, it is impossible for any foreigners to own land there. Once considered highly classified among Bocas locals, Kusapín is now becoming more popular as one of the best beach breaks in Panama. Go here with a guide and treat this place and its people with the utmost respect! 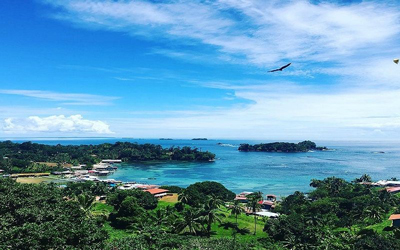 Bocas del Toro has two surf seasons in the year. The first surf season coincides with high season for tourism which is November-March. The biggest and best swells will mostly occur in December, January and February when the waves can be overhead for weeks on end. This is also the most crowded time of the year, but with a little effort and the right guide you can score uncrowded or empty waves your entire trip. November and March also receive swell and are less crowded. During high season there is almost always some swell, so if it’s not head-high on the reef you can always go to bluff, wizard or long beach and score.

The second surf season in Bocas del Toro occurs during June, July, and August. This season is characterized as having less powerful swells than high season but also less crowds and glassier conditions. Again, if the swell isn’t head high on the reef breaks around Bocas, hop on a boat or hike to the beach and you will have just as much fun! 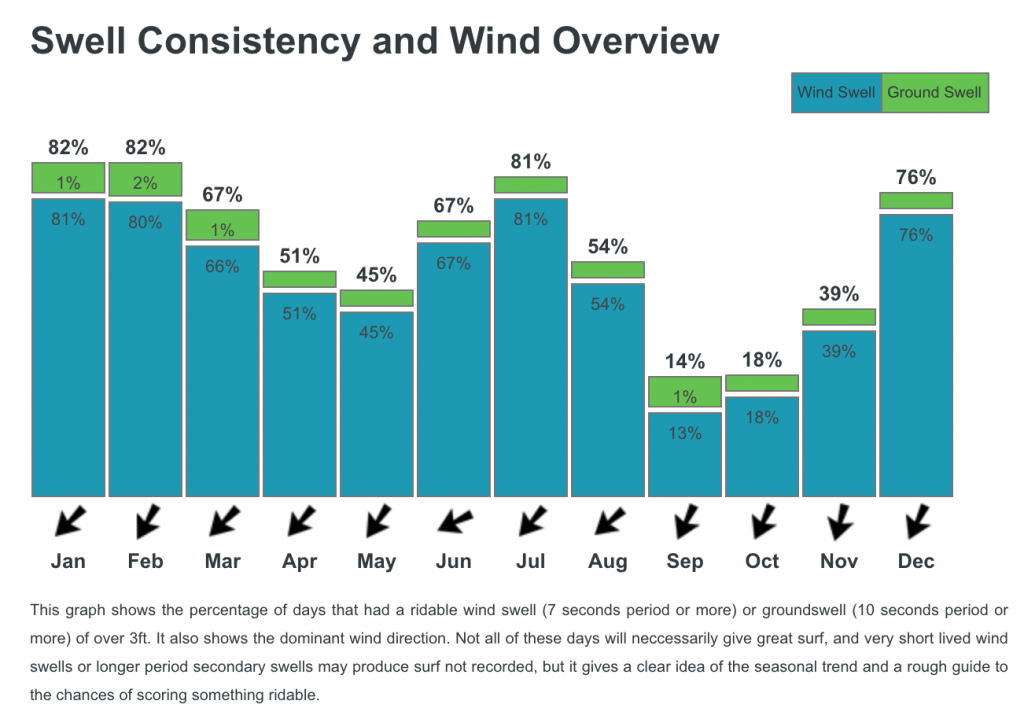 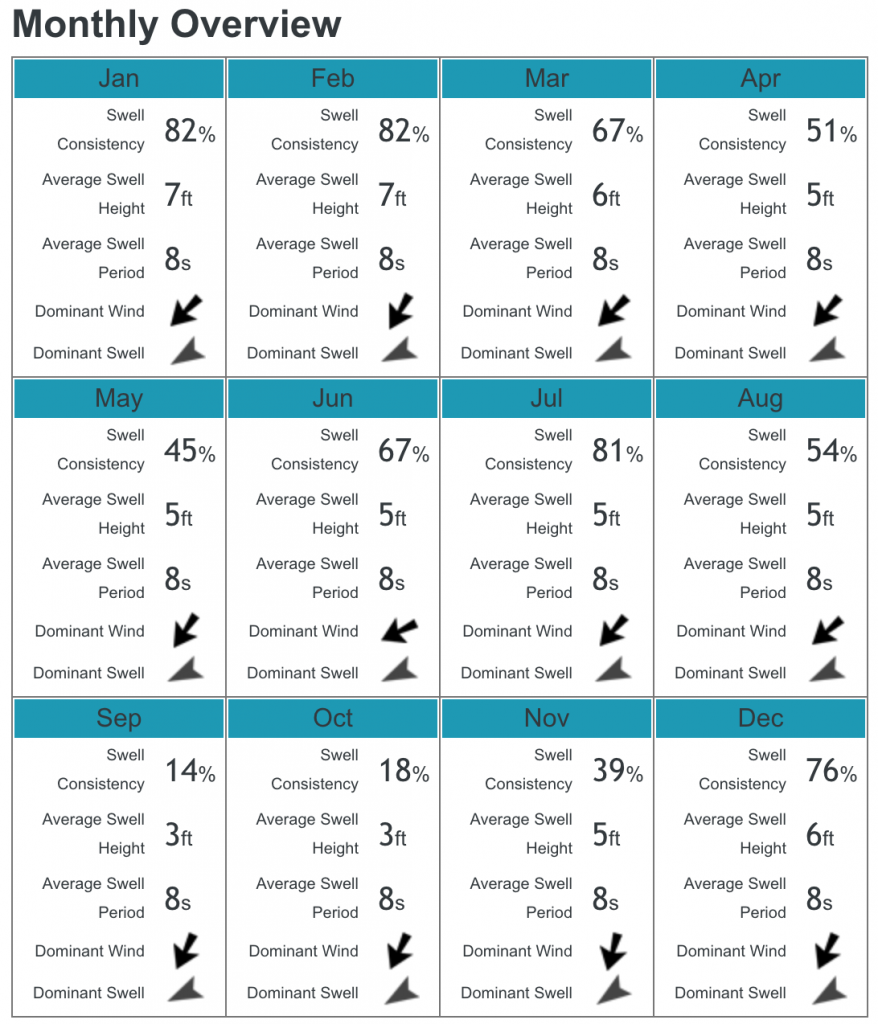 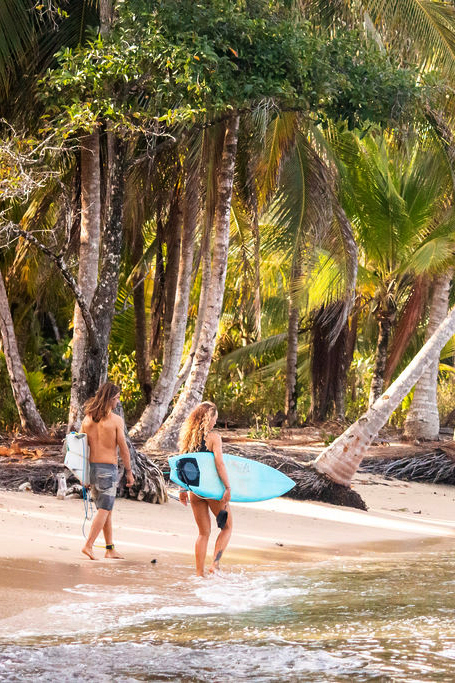